In search of lower-cost, smart pharmaceuticals: to reign in health care costs, we need to invest in the right kind of research and innovators

In search of lower-cost, smart pharmaceuticals: to reign in health care costs, we need to invest in the right kind of research and innovators 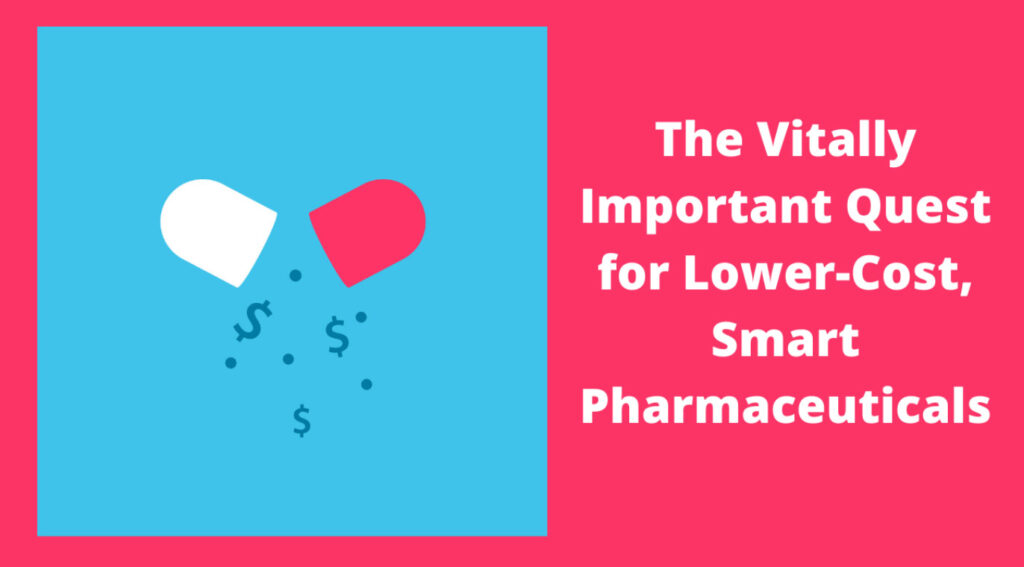 We all know health care costs in the U.S. are absurdly high. As a percentage of GDP, our health care spending is more than 50 percent greater than the runner-up, Germany. Over recent years, the growth rate in health care spending has been double the growth of the overall economy, yet societal wellbeing continues to decline. And perhaps most stunningly of all, for those who face a major health crisis or chronic disease, it is all too common to see expenses that stack up into hundreds of thousands of dollars or even bankrupt families completely. This is not just sad, it’s unacceptable.

As a pharmacist with a background in pharmacological research, I’m familiar with one major engine behind that trend: a move towards increasingly complex and sexy-sounding novel drugs and treatments used to justify these high costs.

But amidst this frenzy of blockbuster medicines, the connection between the high price of a drug and how well it works is becoming looser and looser. Obviously, patients should receive treatments that have been clinically proven, and doctors are obligated to recommend or prescribe things that are supported by data. What we’re missing is the research and investment in cost-cutting models: companies that research and produce low-cost medicines and try to make treatments simpler and more efficient.

When affordability aligns with safety and convenience

Recently I wrote about the shift in research on inflammatory disease, from classic, time-tested NSAIDS and antihistamines to biologics. Biologics are a new category of medicines with fascinating potential, but as I pointed out, they are complex to manufacture and administer. They require injections or infusions, they break down easily and therefore have special storage and shipment requirements, and they often cost hundreds to thousands of dollars per dose, which are costs that are passed on to patients or through insurance companies to the public at large. Big Pharma companies are incredibly proud of these highly sophisticated, “sexier” solutions. But are they also the smartest solution, truly?

To delve further into that topic, consider this example. Say you have rheumatoid arthritis, one of the more common autoimmune diseases. If you’re young, one treatment a doctor might recommend is an NSAID—they are in fact often effective at managing inflammation even for serious conditions. But if you try a NSAID and your symptoms break through, or you have gastrointestinal side-effects from the NSAID, your doctor probably won’t want to drag you—as an individual—through a long process of trying different NSAIDS to find a better match. There’s no one really working to optimize NSAIDS, so patients end up jumping to a different class of drugs altogether.

The next option under the current regime is methotrexate, a very powerful drug also used for chemotherapy. Methotrexate can initially be effective, but it can cause a lot of side effects and put you in this scary category of being “immunocompromised,” which is even more unsettling word for people in the age of COVID. Then, if methotrexate alone isn’t enough to control the disease long-term, the next option is adding one of those novel treatments, such as an injectable biologic drug, and it can cost thousands of dollars per treatment.

Is that really the best protocol for patients? There are more than two dozen NSAIDS and most of them are off-patent, and dozens of different antihistamines, all of which are related to the core problem, inflammation. Additionally, there is strong evidence that some antihistamines can help block the gastrointestinal side-effects of NSAIDS, making them more feasible to take regularly. Many of these drugs may be superior in their efficacy, side effect profile, and convenience—requiring just a daily pill—compared to the expensive newer drugs. But until someone steps forward to do the research, find the best combination and dosage, prove it works, and develop a concise, well-packaged product, doctors and patients are stuck with their limited toolkit.

Stepping away from rheumatoid arthritis, there are many cases where I think NSAIDS and antihistamines, in the right combination, will prove advantageous for many people, and I’ve already seen some evidence to back it up. Those situations include treating the inflammatory symptoms of COVID, managing chronic pain without risk of addiction, helping people cope with opioid withdrawal and even avoid hangovers. And scientific researchers, worldwide are starting to agree with me.

Big pharmaceutical companies are entrenched in their model, spending hundreds of millions finding new drugs or buying patents from small companies that can’t fund a full clinical study on their own. When a new drug hits the market, pharmaceutical companies argue the big price tag to patients and insurers which is necessary to recoup those extensive research costs. And maybe their shareholders are behind these escalations as well.

The fact is, it’s much less expensive to develop new and exciting treatment regimens studying known drugs. Their safety is established, we know they work, and we can look over existing data and find fascinating connections, when those taking the meds long term turn out to have lower rates of other symptoms and diseases. It’s relatively straightforward to test it when you already see it working. Those savings, in turn, can be passed on to consumers, creating a better market for everyone.

Do well by doing good

There are people who think a pharmaceutical company with a mission of charging less for drugs is a surprising act of altruism. What it really is, I think, is a chance for people to align their ideals with good business, because there is certainly a vast market for these options. At the same time, policy makers and philanthropists who are looking for ways to reel in the exorbitant price of treatments ought to think of this as one of the ways to get there—a path of least resistance. Instead of fighting industry to control costs, invest in affordable options. And in the meantime, develop new pharmaceutical options that are safe, convenient, empirically sound, and improve quality of life. Now that’s what I call win-win.

PrevPreviousThe case for the balanced beauty of repurposing established drugs in novel combination: Is Big Pharma overlooking the goldilocks solutions right under our nose?
NextAlcohol Hangover treatments and the classification for treating hangovers as a diseaseNext

See our Capital Campaign on WeFunder