How an innovative Pharma company wants to re-invent pain and inflammation treatment for the benefit of all.

“In the face of pain there are no heroes,” said author George Orwell — but an ingenious group of scientists and entrepreneurs may prove him wrong by forever changing the way we treat pain and other life threatening diseases.

It all starts with inflammation. We know it is the body’s natural response to injury or infection, but not everyone understands that when inflammation goes wrong, it leads to troublesome chronic pain and degenerative disease. Focusing on inflammation as the source of the pain, as well as a multitude of diseases, creates a breakthrough to addressing the health burdens of billions of people. Think of alleviating the suffering of a child in inflammatory agony with an ear infection, or soothing the crippling joint pain that robs the elderly of mobility and independence (again,  inflammation). A bout of sciatica can leave us with nagging aches for weeks, and inflammation can lead to “painsomnia,” when pain disrupts sleep, well-being, and quality of life. Worse still, inflammation has even been linked to COVID-19, which preys on the body’s overreaction to inflammation as well as the harrowing plight of opioid withdrawal. Inflammation is the consistent
culprit.

So prevalent is this fundamental health problem that the non-steroidal anti-inflammatory drug (NSAID) business reached $15.5 billion in 2019 alone. But a new approach could represent greater freedom from suffering and revolutionize how we manage many specific ailments; even the devastating inflammatory effects of severe COVID-19 and opioid withdrawal.

A Novel Approach to Flipping the Pain Script

Thirty-plus years ago, during her fellowship at Sloan Kettering Memorial Cancer Center, registered pharmacist Jackie Iversen questioned the stunningly high occurrence of patients in pain. She wondered, “Why are we treating pain rather than preventing it?” This led her on a decades-long journey exploring diverse solutions — from designer discovery drugs to well-embraced, universally applied agents. And like other “eureka!” moments in history, Jackie hit upon a novel solution with elegant simplicity as her guide. Why not apply two existing, well studied molecules which, when combined, appear to safely achieve broad-spectrum anti-inflammatory action with few side effects — a pharmaceutical holy grail.

Fast forward — Jackie Iversen is Founder and Head of Clinical Development at Sen-Jam Pharmaceutical, a “David,” (vs. Big Pharma Goliath) life sciences company dedicated to upending inflammation treatment and management. Sen-Jam is partnering with the medical community’s brightest to carry out clinical trials for several promising therapeutic areas, including COVID-19, because many of these issues have inflammation as the real, albeit covert, source of debilitation.

“People don’t have many choices to treat inflammation,” Jackie said. In addition, few understand that the source of these symptoms is the body’s own inflammatory response. How many cold sufferers realize that instead of reaching for a decongestant when symptoms become miserable, they could use an anti-inflammatory to curtail the congestion and sore throat before they start? “Upon realizing the symptoms generated by inflammation, people can soon have access to products that safely and effectively bring fast relief,” Jackie said. My vision is someday millions of people can get treatment to radically change the way they deal with inflammatory pain.

For pain and inflammation, the go-to drugs are corticosteroids and NSAIDS. While steroids may be effective in the short term, they come with a constellation of side effects, including high blood pressure, weight gain and fluid retention, intense mood swings, and nausea. Long-term use has been associated with cataracts and glaucoma, increased risk of infection, osteoporosis, high blood sugar, and adrenal fatigue. NSAIDs such as ibuprofen, naproxen, and aspirin are available over-the-counter (OTC) but come with side effects such as gastric distress, ulcers, and internal bleeding.
Ironically, pain management options in the form of opioids have led to exponential suffering in the form of addiction. Despite the risks, the global prescription and OTC anti-inflammatory market, including NSAIDS, biologics, and steroids, is projected to reach $191.4 billion by 2027. These currently available solutions leave sufferers playing the pain game with one hand tied behind their backs.

Sen-Jam Pharma is pioneering an approach by combining non-steroidal anti-inflammatory drugs (NSAIDS) and antihistamines, when combined, are believed to be the keys to effectively addressing inflammation. Both have long safety track records. “Each of these two drug classes have the potential for a number of capabilities, yet are only marketed for one use. By selectively combining agents from each category to enhance their anti-inflammatory actions, we can improve the consumer’s over-the-counter (OTC) options,” Jackie said. “These products would be safer and more efficacious than the current OTC pain and cold meds, the best hangover medicine, and an alternative to prescriptions like Celebrex and steroids. That’s a very big market.”

She and her husband, successful entrepreneur Jim Iversen, founded Sen-Jam Pharmaceutical with a vision of creating a new, altruistic pharmaceutical paradigm — Pharma for the People — to bring better, safer, less expensive solutions to market as part of a drive to democratize the drug industry. “We envision a new model for treating inflammation across the board,” Jacqueline said.

A Dangerous Catalyst: Inflammation at the Gates of Hell

Researchers now know that when inflammation is chronic, it becomes a catalyst in disease. According to an EMBO Press article, The Inflammatory Theory of Disease, “Inflammation has long been a well-known symptom of many infectious diseases, but research increasingly suggests that it is also intimately linked with a broad range of non-infectious diseases, perhaps even all of them.”

Runaway inflammation plays a starring role in everything from arthritis to opioid withdrawal, in which case the nervous system and brain enter an amplified inflammatory state. New research correlates inflammation in the brain and gut to pain and negative emotional states during opioid withdrawal, and fear of this excruciating experience deters many from ending opioid drug use. “Until there’s treatment that’s easily accessible and reduces withdrawal intensity and duration, many people will default to illicit drugs,” said Jim Iversen.

Excessive inflammation is a hallmark of severe COVID-19. When confronted with the virus, the immune system can go into a hyper-inflammatory state of overdrive known as a “cytokine storm,” producing uncontrolled inflammation throughout the body that can lead to acute respiratory distress syndrome (ARDS) and death.

Currently there are no options for de-railing COVID inflammation in advance of a crisis. The steroid drug Dexamethasone is used for those in a COVID-induced cytokine storm, but when patients lack evidence of severe inflammation, steroid drugs make them worse. There is also a question of steroids suppressing the immune response. “Steroid-induced immune suppression could inhibit adaptive immune responses, potentially limiting recovery and immune memory that could be required to prevent reinfection,” Jackie said. In addition, Dexamethasone is delivered to COVID patients intravenously — it’s not a drug for home use.

The Anti-Inflammatory Breakthrough: News You Can Use

Jackie was aware of the potential of combining NSAIDS and antihistamines long before the pandemic, but wanted to establish proof of concept. “I wanted to show how potent and safe this NSAID/antihistamine combination could be,” she said. She looked to one of the most reproducible inflammatory conditions — the alcohol hangover, with its head and body aches, nausea, and fatigue. While traditional wisdom asserts that hangovers are the result of dehydration, Jackie found evidence that symptoms are instead caused by inflammation, and saw an opportunity to prove her theory. 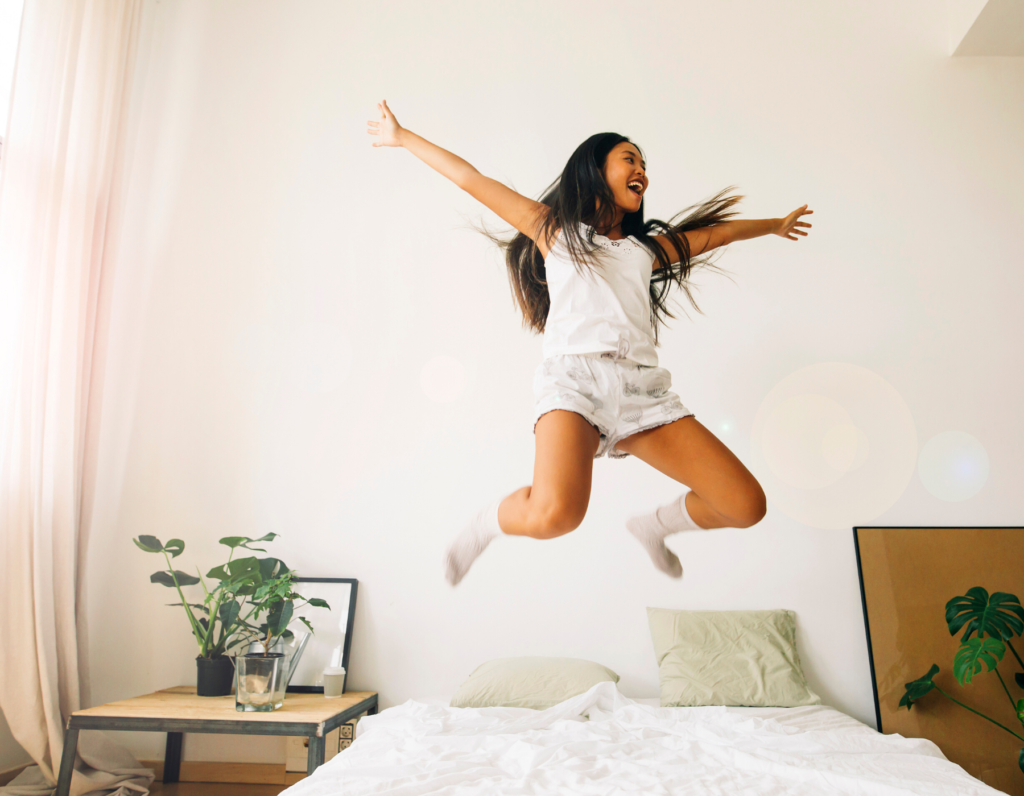 When volunteers were given a combination regimen of a select NSAID and a select antihistamine, the resultant hangovers were eliminated or reduced — these results have been repeatedly reproduced. Currently, Sen-Jam has an open Investigational New Drug (IND) application to begin a Phase I Clinical Trial, and is seeking investor funding. Patents for this indication have been granted in four countries, including the USA, and are pending in eight additional countries.

Jackie’s research led to the discovery of a new potential for NSAID/antihistamine activity — antiviral action. “Both Naproxen and Indomethacin showed antiviral activity against the first coronavirus strain in 2003. We didn’t think that an antihistamine like Ketotifen would have antiviral activity, but we submitted them together for a lab review to be sure. The combination showed an additive, perhaps synergistic, capacity for reducing viral loads of SARS-CoV-2 in-vitro. This result was so surprising that the lab repeated the tests three times to confirm the results,” she said.

With these results, Jackie reached out to immunologist Ashley St. John, Ph.D, of Duke-NUS Medical School in Singapore, who had been studying Ketotifen’s anti-inflammatory activity. “Dr. St. John had done a human study with Ketotifen in Dengue Fever — if you can mitigate or reduce the inflammatory response in Dengue, a virulent mosquito-borne virus, you can do it in COVID 19,” she said.

“Ashley’s lab at Duke-NUS was exploring the therapeutic potential of mast cell stabilizers such as Ketotifen for COVID-19, and I came to her with the idea of combining it with indomethacin as a therapeutic for COVID-19 for maximal anti-inflammatory capability, that can be safely administered to patients on day one,” she said. Now Sen-Jam is in co-development with Duke University/Duke-NUS with Dr. Alexander Limkakeng Jr. as the coordinating investigator, to determine if SJP-002C (Indomethacin + Ketotifen) can reduce COVID’s progression to severe disease by reducing inflammation and viral load. “The collateral damage to the lung tissue caused by inflammation is the major obstacle to recovery from COVID-19 and so we think a targeted approach to reduce inflammation has the potential to improve health outcomes,” said Dr. St. John.

“We plan to enroll patients in November, 2021. The study will take place in Kathmandu, Nepal,” Jackie said. Sen-Jam and Duke-NUS currently have two patents pending on SJP-002C, and are seeking investor funding for this Phase 2 clinical trial.

Patents have been secured for opioid reduction applications, arthritis therapy, vaccination reaction, and alcohol hangover. “Some final products will be OTC, such as the hangover and cold products. Others will be by prescription,” said Jacqueline. Her ultimate vision is of a new pharmacy aisle for inflammation treatment, accessible to anyone who walks through the door.

The Fast Track to Market: A Light at the End of the Tunnel

Sen-Jam CEO Jim Iversen, identified a route to fast-track products to market — the 505 (b)(2) pathway, which, according to Pharmacy Times, “Provides manufacturers who have certain types of drugs with an opportunity to acquire FDA approval without performing all the work that’s required with a new drug application (NDA).” The cost and time of bringing new drugs to market is around $2.6 billion dollars and 11.5 years, but because Sen-Jam is working with two established drugs, the pathway is a fortuitous opportunity to acquire FDA approval for about $20 million dollars in a warp-speed 42 months — a fraction of the time and money required for NDAs. This risk reducing strategy is expedient and exciting for both investors and consumers.

Sen-Jam’s innovative business model is to de-risk the clinical and regulatory pathways and seek a strong licensing partner — the patented drug combinations would be manufactured and marketed by established partners, eliminating the need to re-invent the go-to-market wheel.

“We know these drugs meet the safety barrier to OTC. Our larger plan is to obtain approval for the prescription indications, but at some point, transition those from prescription to OTC products,” said Jim. “An oral therapeutic regimen that will cost less then a COVID-19 test is a global game changer. I put my confidence and money behind Jackie & Jim,” said investor Richard Goldberg, President of Warm Thoughts Communication.

What Sen-Jam Pharmaceutical is offering, in terms of potential pain, inflammation, and disease management, is nothing short of a radical shift in the arguably outdated current treatment paradigm. The products derived from these ingeniously combined molecules would be economical, accessible, and if evidence continues to accumulate as it has, effective. Sen-Jam’s 24 domestic and international patents and patents pending signal a break-through inflammation treatment model that could revolutionize pain management and relieve human suffering on a global scale.

PrevPreviousPowerful Video on the Triply Complicated Nature of Opioid Use Disorder

See our Capital Campaign on MainStage